Jörg Haubner:" TJing is not only what you play but at which time, combination and order" 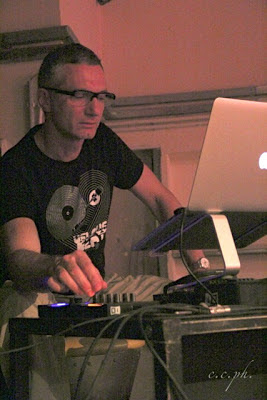 Today our travel lands in Germany, Dresden, and we meet Jörg Haubner, another great TangoDJ. A deep knowledge of tango repertoire, every song is chosen with meticulous care. Experimentation and new paths, this is the track that led Jörg to be a TangoDJ. As he said "I started to DJ when I danced around 4 years. I mostly got bored constantly listening to the same sad Tangos , but I realized there is much more what DJs didn't or seldom played. I simply liked to show there is another way". Enjoy.

From the beginning: I suppose that your first approach with tango, like for other DJs, was with the dance. What inspired you to get into console and play music? A conscious decision or was the result of chance? I started to DJ when I danced for about 4 years. I mostly got bored constantly listening to the same sad Tangos, but I realized there is much more what DJs didn't or seldom played. I simply liked to show there is another way.

What was your early taste of tango?
Honestly, at the very beginning I liked most Electro-Tango followed by funny Foxtrots, Rodriguez, Donato, Biagi...

The difficulty of the search for songs on CD often burned has been replaced by? the explosion of the Web and the consequent relatively easy way of finding?the music. Do you think this paradigm shift has changed the DJ ́s way of working?
Often DJ's who played from CDs were arguing that computer-DJs being endangered to constantly play the same order or complete playlists. Imho the opposite is the case. CD-DJs are limited with the tracks on one or max 2 CD's or they have a lot effort to change which robs a lot of attention from the audience and from preparation of the next tanda. At home I work a lot on my tracks. This means if necessary, I change dynamic, equalize, de-click, remove hum, correct phase-shift, adjust the lengths of silent parts on start and end.

When do you build your performance? Long ago, during the journey to the milonga, or suddenly spontaneously? moment by moment? It's a mix of them. I use different preparation lists on which I work on permanently:
1.) Tango-Tandas 2) Vals-Tandas 3) Milonga-Tandas 4) Cortinas) 5) "I- necessarily-need-to-play-Tandas. From this playlists I choose the music for the current playlist moment by moment. These prepared tandas mostly include more tracks than needed. In the moment I make my selection, I exclude surplus tracks. Which ones, is depended on the event and level (Milonga/Festival/Marathon)

Have you ever played in a boring night?
Yes this happened!

Have you (understood) realized too late that perhaps the milonga could not give you the right motivation and you could not wait to finish? Would this have been helpful? I don't like open-end-events! People are going home when they are very tired, not when the mood is on the highest level. It's a bit annoying to see those people go. Better is a fixed end where you can add some extra-Tandas if the party is still going on.

Do you accept whatever you are offered or do you try to make a selection preferring location and fascinating evenings with friends? There was no selection needed until now. First come, first safe.
How would you define your style?
I play music from end of 20's to the 50's. I would say I'm courageous to play an above average amount of less played but still easy to dance stuff. If I like a song, I directly go to the DJ and ask him what it is.

It has evolved over time?
I hope so ;)

And in which direction?
Years ago I didn't like late 40's, I never played 50's or later but played a lot Guardia Nueva songs. I still play those, but not so much anymore depending on the daytime, crowd...

What can you influence ? in an evening, the audience, the dancers, the acoustics of the location, the duration of your performance ... If the acoustic is horrible, which still happens quite often of course I try to equalize the room. Sometimes you cannot change conditions. For example people speak to loud because the loudspeaker are installed at the wrong place...If this is the case of course I will tell the organizer. If he doesn't change I will not DJ there anymore. In the meantime I need to play more familiar music because the dancer is able to supplement the missing parts of music from his own memory. Of course the dancers will influence my choice. If the floor is packed I would play more rhythmic and faster music, not music that calls to bigger ground covering movements. If the level is low I wouldn't play complex but easier structured music.

Do you prefer playing alone or sharing the night with a colleague. Generally prefer to work alone, or with friends who you feeling? Or, you love the thrill of experimenting with a colleague never listened to? until then?
I would say at a Milonga I prefer to play without any colleague. On Festivals you do not have so much time to play anyway because of the shows and live music. On Marathons I would prefer to be surrounded by DJs who play a
completely different style compared to mine. That's very interesting to see how the audience react.


If someone asks you the name of a track, do you tell him, perhaps suggesting on which CD it is included, or invite him to venture into the trouble of searching? I will tell the name of the track and artist because TJing is not only what you play but at which time, combination and order. I wouldn't say "trouble". It's a bit like Christmas and Easter at the same time if you discover some new.

You get bothered with absurd requests: what do you do? Are you a jukebox? Organizers who invite me knows about my style. Ok a DJ should be able to adjust but imho not too much because then he isn't authentic anymore and this wouldn't help anyone.
Recently a woman came up, asking if I could play a Di Sarli Tanda. I told her that I already played 2 Tango-Tandas and 1 Vals-Tanda of him during the night. So maybe one of the other guests who doesn't like Di Sarli is waiting for another orchestra which I wasn't able to yet. One asked me to play more instrumental Tangos and more Milonga-Tandas. I played less sung Tangos but I would not change my Tanda-system during the event which is 4T-4T-4V-4T-4T-3M-4T-4T ... and so on. Dancers can trust in this. Ok at the end of a night I play slower Milongas or no more... For the Piazzolla-request I found some very nice tracks from the years 1946 to 1947 ;))

Do you like to dance and listen to your colleagues?
Yes there are some whose choice I really enjoy! Afterwards I'm annoyed with myself for havin
g danced so much instead of studying the choice, order, flow...


Do you believe that the art of “musicalizador” is different for geographic areas? Argentina, USA, Northern Europe, Eastern Europe, the Mediterranean ... or is it similar in all countries? The differences are bigger in the character of events than between geographic areas. But I would say in the north they are more humble, quiet, tender and sensitive, in the South more assertive, extroverted and energetic. Not in general but in average.

Would you like to have a milonga just for you, furnish it with the appropriate facility to your desires, try to create a wave that satisfies you over to play when you want and create a calendar of events to measure your tastes?
I already have such a Milonga but I prefer to travel for TJing

What are your requests to the organizers?
To get best results/success of your event there are some necessary work conditions:
I need a good overview to see and feel the floor, so the DJ-desk should be positioned higher than the heads of dancers. Perfect is a bar-chair on a higher table, situated on a pedestal. It should not be behind but in front of the loudspeakers to be able to adjust the sound of every single track or at least a monitor loudspeaker to hear the same music as the audience to adjust the sound. A place nearest by the dance-floor, technician, Maestros (Festival- Show) is very helpful and easy to arrange but the technician needs to know in front of the event.

The classic point-blank questions you have to answer, you cannot refuse: Three orchestras that can not miss in one evening.
D'Arienzo, Fresedo, Canaro

Your three favourite orchestras, which may also be different from the previous ones.
Troilo, De Caro, Laurenz

What are the three bands or singers you cannot stand?
Goyeneche Florindo Sassone Villasboas Quarteto Firpo

And which is the most overrated?
Pugliese (great but not the only one for this kind of music. Why not Gobbi, De Caro or Francini-Pontier, when dramatic/dynamic/bombastic music is asked for?

Your top three nights (in your opinion of course ...)
I do not like to upset anyone, but I can say it was on marathons. My personal taste seems to fit best this kind of events.

We are less serious: Last night a dj saved my life. The DJ role? is sexy? have you ever had a relationship with some fans and
Who knows!? My Job as a DJ takes the most time and effort in my life so it's clearly a part of me.

some flirt with your colleagues?
No, but it would be very practical ;)
Pubblicato da supersabino a 03:31